The inside of Cielito Lindo Tortilleria, a Latino and Hispanic grocer on Northside Drive.

Macon, Georgia is home to an outrageously named baseball team, beautiful cherry blossoms, and a lot of soul, but there is also several Hispanic and Latino grocers, or Tiendas.

Macon has three Latino/Hispanic grocers. One of these grocers, Cielito Lindo Tortilleria, is owned by Juan Corona and his wife. The store opened on Northside Drive six months ago.

The Coronas moved to Macon from Florida and then decided to open their store.

“We see potential in this little town,” Corona said. “There’s a lot of Spanish people here.”

Corona’s store functions as a grocery with cooking materials, snacks, and fresh produce as well as making fresh tortillas.

While Corona’s business is bustling, data from the U.S. Census Bureau shows that Macon does not have an overwhelming number of Hispanics and Latinos.

“What you notice about most ethnic restaurants, ethnic stores, is there in neighborhoods where there are already a lot of people of that ethnicity already,” Dr. Steve McClung, Professor of Marketing at Mercer University, said.

However, that isn’t always the case in Macon. Looking at Macon’s Census tracts, or region for taking and grouping Census data, demonstrates this. For example, Cielito Lindo Tortilleria is in Census Tract 134.07. According to U.S. Census Data, only 103 people identifying as Hispanic or Latino live in that tract. Tienda Y Carniceria Mi Preferida and El Carnaval Latin Food Store are located in census tract 126, where 59 Hispanics or Latinos are recorded. 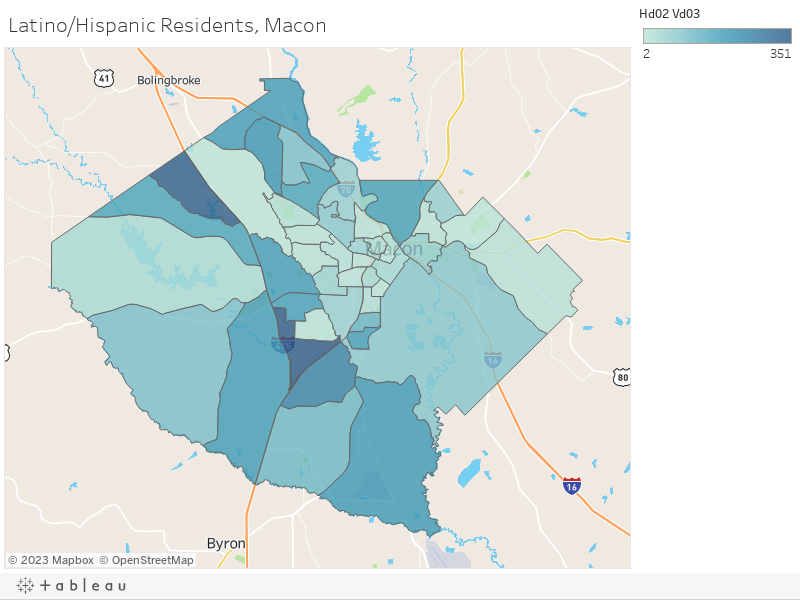 Corona opened his store on Northside Drive because there wasn’t a store to serve that population of Latinos and Hispanics.

“That’s our model to motivate us to open,” he said.

Corona wanted to bring a convenient location to the population.

“Like these people has to drive from here all the way down to Pio Nono Avenue to like say 15 minute drive,” Corona said.

According to Corona, another problem is most of these people don’t drive.

“A lot of them, they don’t drive and they have to look for somebody to take them to the store,” he said.

According to Bisnow, ethnic grocery stores are increasing in the United States, especially in Atlanta.

However, McClung said the larger grocery stores are trying to nab a piece of that market.

“Our regular grocers are really stepping up to meet demand in their stores. Kroger has an aisle of ethnic foods and that’s a five-year change,” he said.

The expansion of ethnic foods in supermarkets doesn’t concern Corona.

“I think people still feel comfortable with us because with (large grocers), they’re hard to communicate because of the language barrier,” he said.

In addition, Corona wants to help his customers find what they want.

“If they ask for something that they’ve been looking around, probably we can help them to get it,” he said.

This sets the store apart from the big chains.

McClung said ethnic grocers are becoming more prominent in locations where the income is higher.

“We have a lot of white people that like our tortilla chips or salsa,” he said.

His customers will even ask his wife for suggestions.

For Corona the easiest part is his customers.

“I’m surrounded by, like, people you know, that they actually like our produce and our tortillas and everything,” he said.

Corona finds Macon has been friendly to him and his store.

“We’ve been creating relationships, almost like family with everybody,” he said.